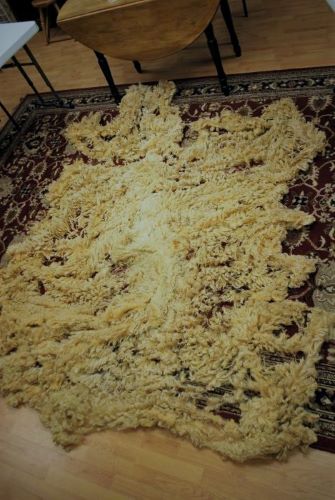 Posted by Linda Davis on 6/17/2020 to Fibers
This is the first fleece I have had in a long time that I was able to unroll and see the entire body of the sheep from which it came. Meet Scarlette (or at least her fleece)! Scarlette is a Montadale. I must admit that I was unfamiliar with the breed. I discovered Scarlette's fleece as I was observing the fine wool judging at SAFF. I was intrigued with the comments of the judge regarding this fleece, and I immediately put a bid on it after the judging concluded. It won first place in the category, and I was thrilled to win the bid. Thus, Scarlette's fleece came home with me.

The Montadale was developed to be a dual purpose breed, coming from the cross breeding of Columbia and Cheviot. You can read more about this fantastic breed at the Montadale Sheep Breeders Association website
This particular fleece comes from Windy Wool Windings farm, which also raises Romeldale/CVM sheep, which is a rare breed under conservancy. It is a working farm, and one of their services is landscaping for solar fields! This fleece is extremely clean and uniform throughout, and the crimp is similar to Merino or Cormo. The total weight of the fleece before scouring is 6 lbs 6 oz. 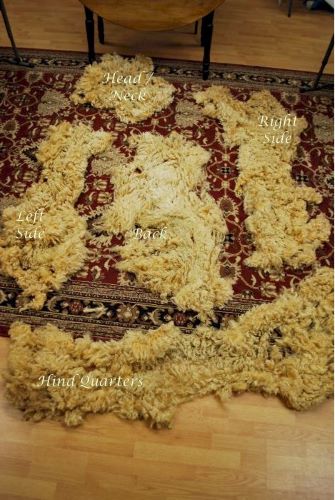 When I got the fleece, I was recovering from Breast Cancer, and I did not feel up to the task of processing a fleece.  I did place the fleece in a prominent spot that kept reminding me that it needed to be taken care of.  The time finally came where I felt I needed a serious project to do.  I reflected on what I wanted to do with this fleece. This one was not "just a fleece," it was perfection.  As I unrolled the fleece and studied it, I found that all the wool was very uniform in length.  I proceeded to separate the fleece, and the only section that appeared to be different was the back section.  It was the same length, but much less dense. Overall, I want to see if there is any difference as I spin each section. My intuition is it will all be similar, except for the back. Since the fleece is so clean, I considered combing it in the grease and spinning it. However, I decided to wash it first to remove most of the lanolin. I removed 8 oz from the hind quarter section and soaked it in Eucalan. This was the first time I did this, and I was extremely pleased with the results. The wool still has sufficient grease, but it is not overly greasy. There are still some areas that are dark with lanolin; however, when combed, they are beautiful and white. When the wool dried, I weighed it again and found that I had 6 ounces. So, I expect to lose at least 25% of the weight after cleaning. 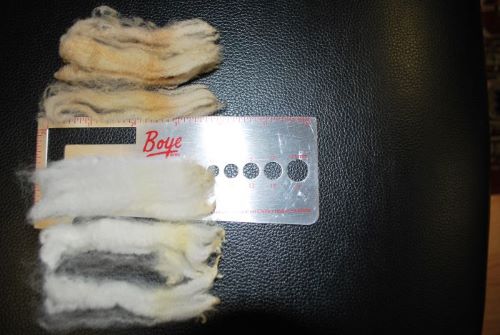 My next consideration is how do I want to process the wool. My past experiences with processing fine wools should have forced me to just comb out the staples and draft the wool into birds' nests. But, I'm a stubborn individual; and I thought I would try picking the wool and run it through the drum carder. This ended, as I knew it would, with a nice soft batt full of pills! Maybe some day I will learn my lesson that I cannot cut corners if I want good results. In the meantime, this batt will not go to waste. It will make nice dryer balls.

I took the remaining wool staples home and carefully combed them out and dizzed them into a basket full of birds' nests that are waiting for me to spin. I will continue with the story after I create some yarn!
Previous Post
Next Post

Welcome to my blog. I am very excited to be able to share the things I love to do, along with what I have been up to. I hope you will enjoy my projects, inspirations, and dreams and use this forum as a positive space to collaborate with others on your projects.

Blog Rules:
This blog will only address topics concerning the fiber arts.  There will be no other discussions allowed.  We all need to respect each other when making comments.  This blog should be about sharing of information and increasing knowledge about our favorite past time.  --  I thank you in advance for your participation and keeping this blog a good place to visit.